Home > Things to do in Bhutan > Hike to the Tigers Nest

What It’s Like To Visit Taktsang Monastery (Tiger’s Nest)

My favorite day in Bhutan was the day I got up close and personal with Tiger’s Nest Monastery or Taktsang Monastery. Up until this day, I had only seen Tiger’s Nest in random photos, and the first time I saw a photo, I wasn’t even sure this place existed! It is a beautiful monastery perched precariously on the side of a mountain; it looks like it was built into the mountain itself!

Bhutan Lhayul Tours & Travels saved the visit to the Tiger’s Nest for the last day since it gives us tourists time to acclimate to the altitude in Bhutan. It also works out nicely since Tiger’s Nest is located in Paro, the city where Bhutan’s international airport is located. In fact, you can actually catch glimpses of Tiger’s Nest from the city. It is so high up, it looks like white dots from the ground! 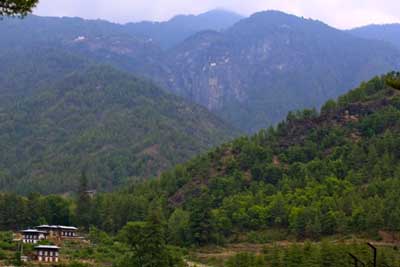 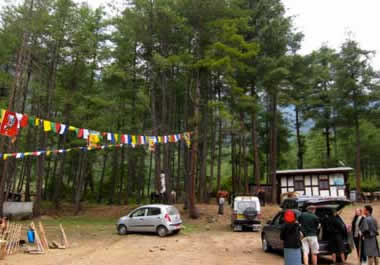 (The white dots in the upper center of the picture is Tiger’s Nest.)

The adventure starts when the guide pulls up to the parking lot which feels way far from the monastery since you can still barely see it! There are vendors selling Bhutanese crafts and horses waiting to give tourists rides up to the monastery.

You can either hike a steeply uphill for 1.5 to 3 hours to get to the top or ride a horse 2/3 of the way. My guide said that the fastest anyone has hiked up was an hour (a guy who was in extraordinary shape) and the longest it’s taken anyone was 3 hours (an 80 year old). I opted to ride a horse and got up to Tiger’s Nest in about 2 hours including a short rest stop to enjoy tea. 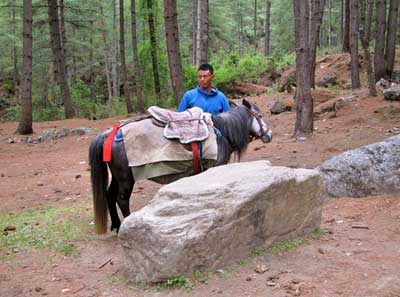 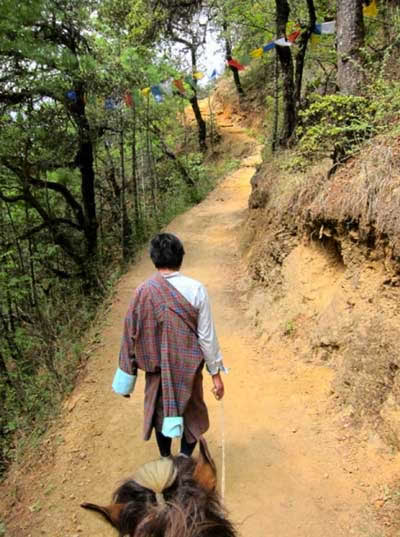 The first part of the trek goes through forests… … but once you’re out of the forests, you quickly gain altitude. At some turns along the way, you even get spectacular views of Paro and glimpses of Tiger’s Nest which still seems so far away! 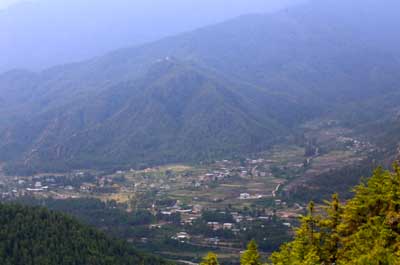 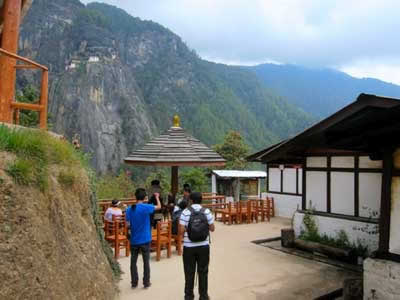 (Paro, Bhutan) (This is the restaurant with prime views of Tiger Nest.)

After 45 minutes, you come to the first stop. The horse rests and you pop into a “café” for some tea and your first truly awe-inspiring glimpse of Tiger’s Nest. 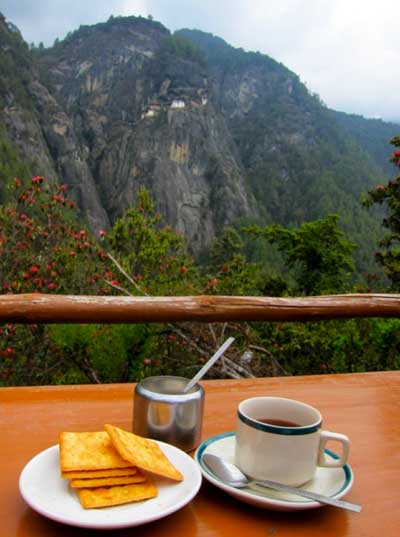 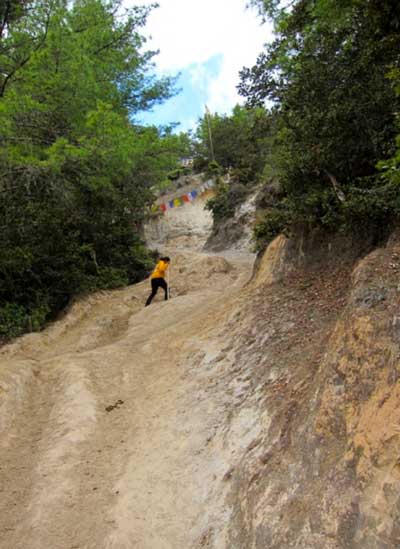 (What a view for a coffee/tea break!)

When you’re ready to continue, the steep climb continues.

After about another 45 minutes, you arrive at a second stop where you have to bid the horse goodbye. I don’t know why they don’t let the horses continue – maybe they want to keep the last part of the trail clean since we’re almost to the spiritual site. Either way, once you get off the horse, it’s all uphill from there. 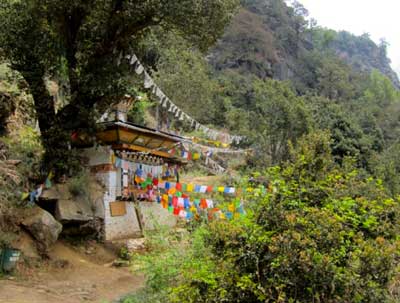 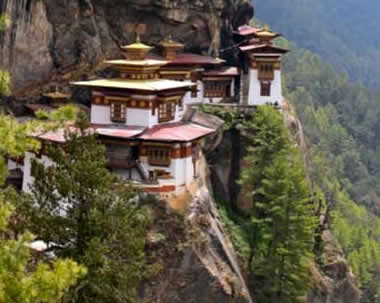 As you go up, you’ll pass by random shrines along the way. You can peer through the windows if you want, but it’s mostly just a picture of a monk and a bunch of money that people threw into the windows as offerings.

You’ll then come to a second stop which is the last “official” picture opportunity of Tiger’s Nest. It is exciting to finally feel so close to the monastery that it’s tempting to stick around and snap lots of pictures!

In retrospect, however, the best picture ops were still to come. The second stop had some trees that still covered part of the monastery. If you continue farther, you can get unobstructed views. 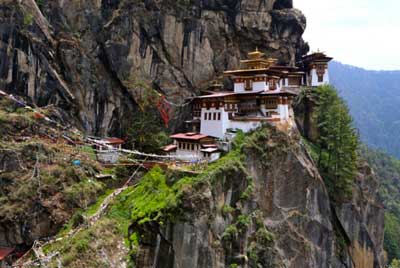 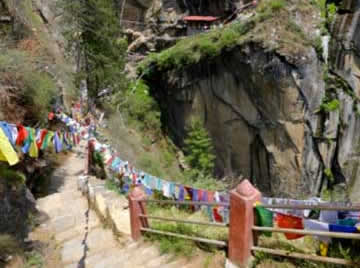 As you get closer, there are 850 steps (both up and down) that you have to climb before you get to the entrance.

As you start the steps, you’ll also notice all the prayer flags every which way you look. Since the Tiger’s Nest is a pilgrimage site, tons of people have strung prayer flags in the last third of the trail leading up to the monastery. 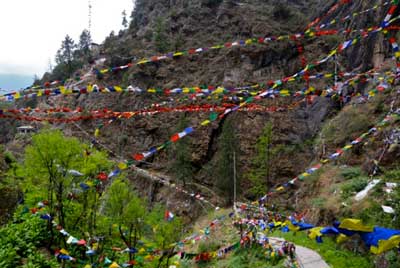 (Can you spot the trail behind the prayer flags?) (Finally! At the entrance… from the outside it’s somewhat anti-climatic because they are focused on collecting all your recording devices.)

You might even catch some people hanging prayer flags as you ascend! In Bhutan, people are allowed to hang prayer flags anywhere they like and what better spot to do that than at Tiger’s Nest where you’re 850meters up from the Paro valley floor and there’s almost always a slight breeze blowing to carry the prayers in the wind? When you’re almost there, you’ll see a waterfall to the left and a short bridge to cross. After the bridge it’s just 2-5 minutes of uphill steps and then you’re at the entrance!

Once you’re at the entrance, you can’t take any more photos. In fact, you have to “check in” your backpack, cameras, mobile phones, and scarf at the ticket counter. Don’t bother trying to sneak any of it in either because there’s a security guard that might frisk you as you walk up to the monastery afterwards.

There are a few rooms to visit at Tiger’s Nest and the visit itself only takes about 45min to an hour depending on how long you linger. My guide brought me to see the cave where the Guru Padmasambhava meditated for three years, three months, three weeks, three days, and three hours in the 8th century; he is the one who introduced Buddhism to the Bhutanese so he is held in high regard at all the temples in Bhutan; Tiger’s Nest was built around this cave site later in the 17th century. We also visited several other temples at the monastery. Each of the rooms is ornate and decked out with images of Buddhist deities and fresh offerings of food and money. The smell of incense fills the air and you can hear the occasional chants from monks nearby. The spirituality of the monastery is omnipresent – so much so that in one temple I gave a silent prayer. It is hard not to feel overwhelmed spiritually given the effort it takes to witness such a sacred monastery in real life!

When you’re ready to head back down, you have to do so all on foot – the horses are long gone at this point. En route, we stopped for tea and for lunch at the same café we stopped at on the way up. In all, it took me about 1.5 hours to get back down including my lunch break. The downhill trek is a serious trek since the decline is steep.  I was sure glad to see that familiar parking lot again at the end of it all! That said, all the effort was totally worth it! The spirituality of the place, the opportunity to witness such a precarious architectural endeavor, and the views of Paro along the way were all worth it! This is a definitely MUST DO if you’re in Bhutan. Also, if you are a Batman fan, I heard Tiger’s Nest was in the movie, too!

If you’re planning on going:

About Taktsang – The Tigers Nest

The Taktsang, or “Tiger’s Nest Monastery,” clings precariously to a cliff of 3,000 feet above Paro valley. Legend has it that in the eight century Guru Padmasambhava flew to the cliff on the back of a tigress and meditated there for three months. Centuries later, in 1684, the 4th temporal ruler of Bhutan, Gyalsey Tenzin Rabgye, built a monastery on the site and gave it the name Taktshang, as a reminder of tis origins in the Padmasambhava legends.