It’s been decades since the fourth king of Bhutan came up with the notion of gross national happiness. But that’s still what comes to mind when most of us think of the country. Even though it’s sort of silly, it proved to be successful marketing, on top of the inherent mystique and allure of this Himalayan nation that was isolated from the wider world for much of the 20th century.

People want to see this “last Shangri-La,” preferably before it changes much more. But that’s not so easy to do. That king, who was then 17, was also prescient in his embrace of high-value, low-volume tourism. The visa application process is cumbersome, there’s a requirement that all visitors book their trip with a licensed Bhutanese tour operator and have local guides at all times, and there’s a minimum per diem of $200 or $250 per person, depending on the season. 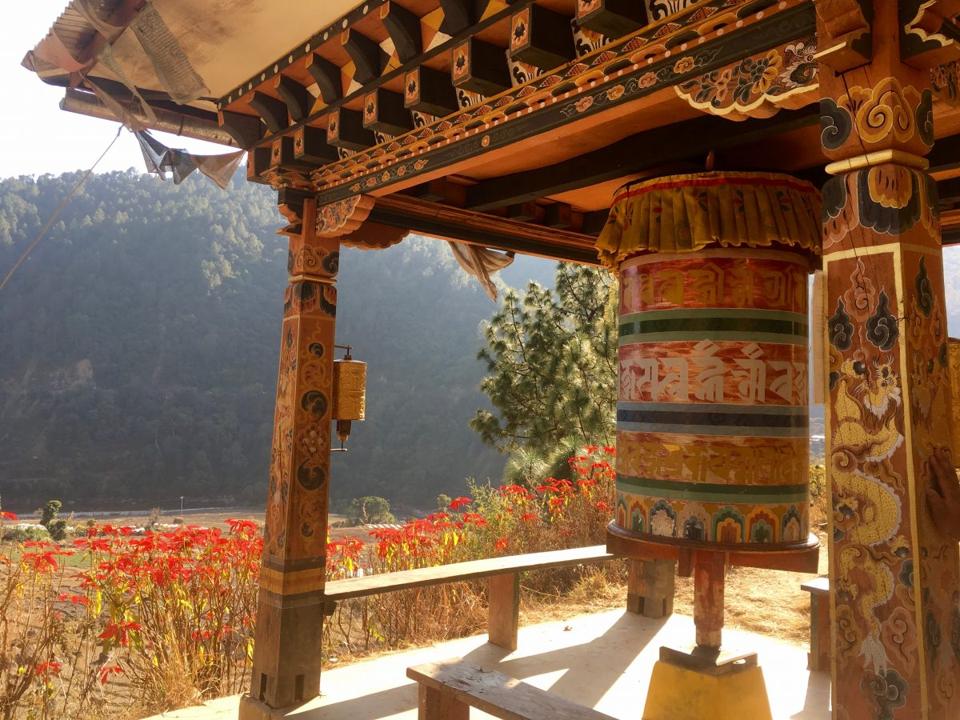 A prayer wheel along the hiking trail near Punakha

That’s actually quite reasonable, as it covers all meals, guides, drivers and accommodation at basic hotels, plus it funds education, health care and infrastructure for the Bhutanese people. (You’ll pay hundreds more at five-star hotels.) It was enough to keep the backpacker set from descending—there are no cafes hawking banana pancakes or by-the-pound laundries.

That doesn’t mean it never gets crowded. Especially in this age of instability, angst and violence, a remote, peaceful Buddhist kingdom has an understandable appeal. The main sites get busy in the spring and autumn, making winter the time to come, says Mark Wright, the general manager of the exquisite Gangtey Lodge. It’s far milder than you might expect, with clear sunny skies and warm afternoons, and hotels are nearly empty. “And it’s half price.”

His lodge is never cheap, but it’s plenty idyllic, with 12 enormous guest rooms that have slipper tubs right in front of their picture windows and cozy wood-burning stoves. An informal dining and lounge area is the social hub, and the food and drink are very good. Top-notch therapists give in-room massages in eight styles, and a new bathhouse offers a luxurious take on the traditional hot-stone bath. Rocks are roasted over a fire for hours and then put in to sizzle at the foot of a tub whose water is mixed with fronds of artemesia, which is said to have healing and calming properties. 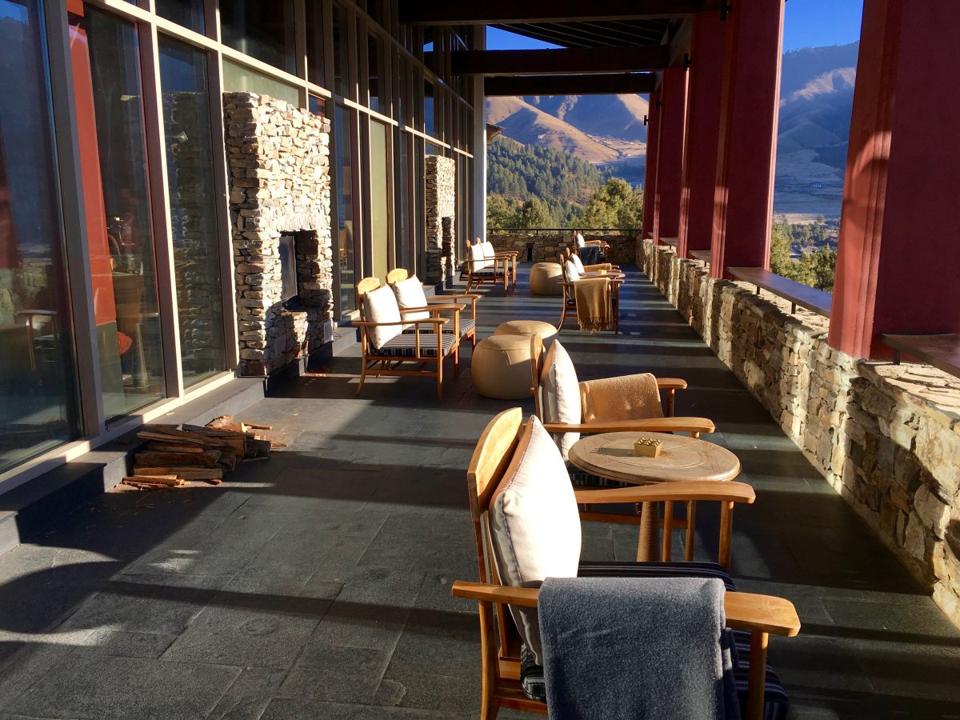 First light over the terrace at Gangtey Lodge

Gangtey Lodge is one of a growing number of ultra-luxury accommodations. Aman started high-end tourism in Bhutan in 2004 with its five Amankora lodges along the usual tourist circuit of Bumthang, Gangtey, Punakha, Thimphu and Paro. They have all the expected Aman elements, from a minimalist design to bend-over-backward service and regular cultural programming. COMO and Taj have been in the game for a while now, and Six Senses is about to debut its own much-anticipated circuit of five luxury lodges.

I felt a particular affection for Zwiha Ling, which felt more Bhutanese than the other hotels I saw—it’s the only wholly Bhutanese-owned hotel to have earned five stars from the tourism council. Its 45 rooms are spread among several buildings on ten acres, all of them tricked out with colorful painting, hand-carved wooden cornices and masterful stonework (and under-floor heating and speedy Wi-Fi). Eschewing understated international modernity, they have bright red-and-yellow silks and hand-knit patterned rugs. The restaurant serves Western and Bhutanese food—get the momos—and on the top floor there’s a full-on temple made with 450-year-old timbers from the famous Gangtey Monastery, where monks spend hours chanting each day.

Another monk gives talks in a separate yoga and meditation space. His approach is a fresh one: Forget about meditating for an hour. Just do it—really do it, concentrating your mind on the moment—for one minute. Sixty times a day. 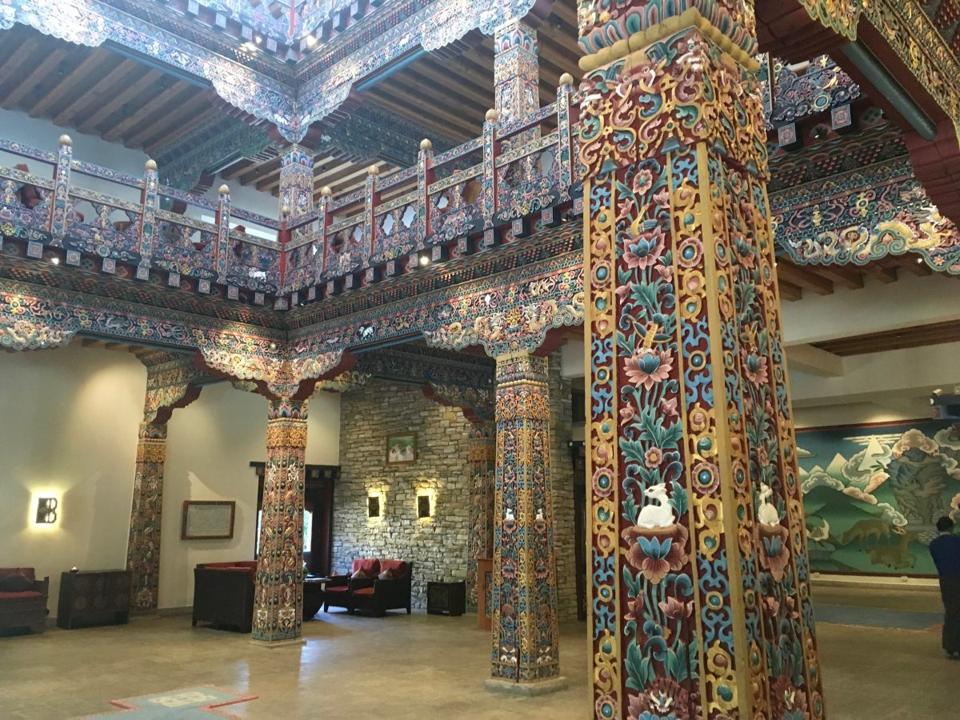 The lobby of Zhiwa Ling,

But no one—not even a hotel junkie like me—goes to Bhutan for the hotels. We go for the vibrant temples and hushed dzongs (fortresses, monasteries and city halls in one). We go to hike over beautiful mountains festooned with flapping prayer flags at the passes. We go for the blessings we can’t understand and the spiritual awakenings we hope to have in ancient temples. We go to understand why the people of Punakha paint so many phalluses on their homes. (If I understand correctly, it’s a fertility symbol, of course, and a representation of power, as a “divine madman” who lived there 500 years ago used his own as an unorthodox tool to teach the dharma and to vanquish demons. Bhutanese women visit his temple when they hope to conceive. A foreigner might also be blessed by a monk who taps her head with a wooden phallus and an archery bow.)

It’s dicey to talk too much about phalluses, Tantric Buddhism (yes, that Tantra—one manifestation of a guru is depicted “in Tantric union” with his consort, whose legs are wrapped around his waist) or any of Bhutanese cosmology and spirituality. The topics are so complex that even my skilled local guides, Kezang and Norzang, prefaced every explanation with, “This is just my understanding,” and made sure that both spoke every time to give us a more thorough, nuanced idea of things.

Guides can make or break a trip—especially in a place like Bhutan, where you have to spend so much time with them—and these two were some of the most knowledgeable, personable and helpful I’ve had. They work for one of the first private tour operators licensed when tourism began in earnest in 1990. (Getting a job there is apparently about as easy as getting into Harvard). At a time when tourism is growing and new tour companies are proliferating, this experienced operator is among the country’s best. 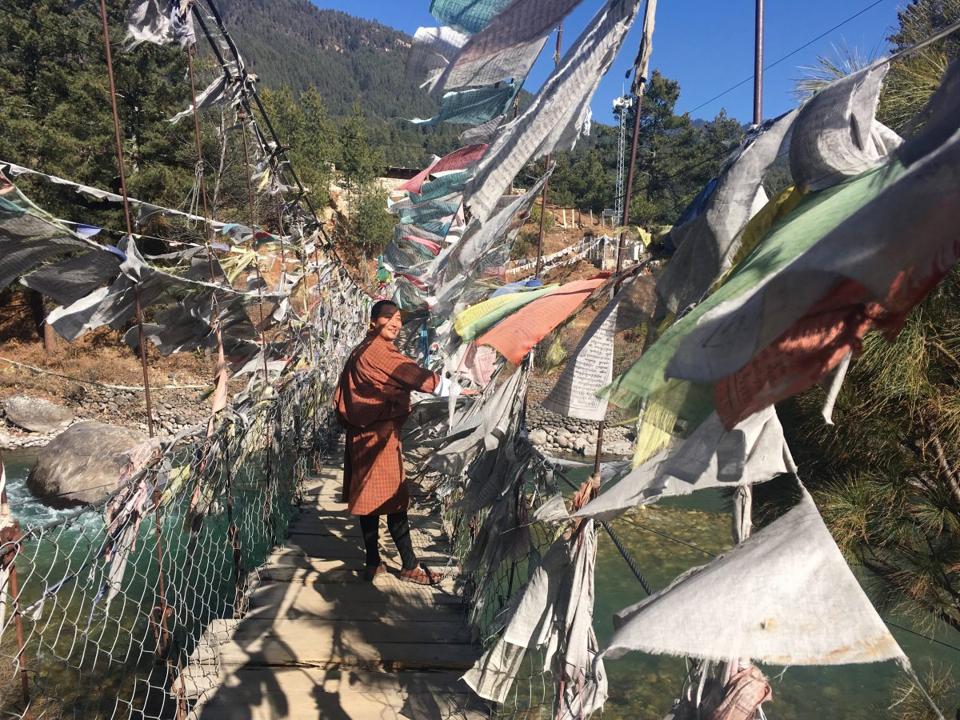 GeoEx guide Kezang on a bridge hung with prayer flags

That’s why the luxury-adventure outfitter GeoEx partnered with it 27 years ago (when GeoEx was still called Inner Asia to emphasize its deep focus on the off-the-beaten-path East). The decades of working together have led to nearly seamless trips (and guides who improvise brilliantly when a seam does show). And GeoEx adds a veneer of comfort, security and coddling that many Americans of a particular tax bracket want. (Full disclosure: My trip was hosted by GeoEx.)

The two weeks hit all the high notes—the cultural heartland of Bumthang (“beautiful valleys”); the stunning dzong in Trongsa; the gorgeous hiking trails and important monastery in Gangtey; the phallus fantasyland in Punakha; the capital of Thimphu (which Norzang proudly noted is the only world capital with no stoplight); and the tourist center of Paro. The hikes and temple visits were a sort of physical and spiritual acclimatization for the famous finale, the steep two-hour climb up to Tiger’s Nest. Somehow built in the eighth century, the monastery clings to the side of a cliff 2,000 feet above the valley floor, and is a pilgrimage site for Bhutanese as well as tourists. Everyone has seen a thousand photos, but that doesn’t make it any less breathtaking in real life.

Seeing it and hearing the stories of Guru Rinpoche—considered the second coming of the Buddha and the central figure in Himalayan Buddhism—arriving to the site on a flying tiger was its own reward. But the GeoEx luxury did not go unappreciated: The hike down ended in a field where a tent, dining table and chairs had been set up and a catered lunch brought in from one of the best restaurants in Paro. 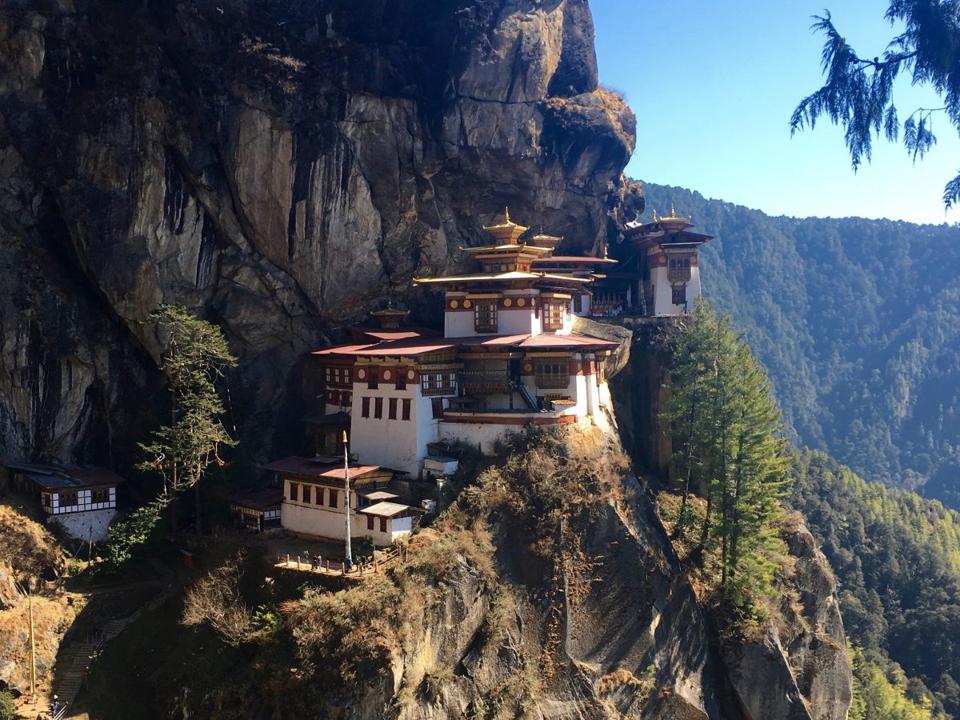 Bhutan isn’t locked in time. It’s modernizing at a visible pace. The country’s main road is being widened as I write this—even as I was riding on it; one day we had a two-hour delay while workers righted an earthmover that had tumbled partway down a hill ahead of us (all part of the adventure). More tourists will come and the connection to the wider world will strengthen—soon. For privileged Americans, it feels like a shame to lose another innocent place. But let’s not over-romanticize the last Shangri-La. Gross national happiness still matters, but so does gross national product. People’s lives generally improve when they join the 21st century. Being a tour guide sure beats being a rice farmer.

That national happiness seems plenty durable. GeoEx warned me that Bhutanese tour guides constantly tease, tell jokes and sing, and they expect guests to join in. (My American group, whom Kezang referred to as “his angels,” had to give a mini concert of John Denver songs.) They like snowball fights. And they love karaoke. When the guides took a few of us to their favorite karaoke bar, it was a trip to see men in their robe-like ghosand women in their tight silk kiras belting out American songs from the 80s with abandon.

About the author Ann Abel:
I’ve been a travel writer and editor for 15 years – including several as a senior editor at ForbesLife – and I’ve written about more than 500 luxury destinations and hotels in 81 countries (and counting). I know the difference between what’s merely expensive and what deserves its high price tag. I’m discerning but not jaded, and I appreciate the hard work that goes into crafting experiences as well as crafting luxury goods. (I’ve written about those, too.) I’ve shared that wisdom with readers of Forbes, Departures, Conde Nast Traveller, Robb Report, Afar, National Geographic Traveler, Islands, Hemispheres, Brides, Modern Bride, Luxury SpaFinder, Well + Good NYC, and other print and online publications. In the name of lifestyle journalism, I’ve gotten a tattoo in Bora Bora, been bitten by a massage therapist, and flown small aircraft above three continents.